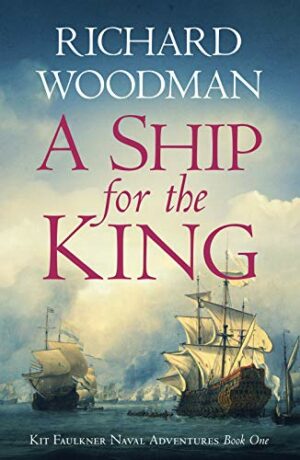 A Ship for the King

With war on the horizon, his path to greatness will be revealed.

Bristol, England, 1618. Kit Faulkner is a young vagrant orphan, taking life as he finds it in the rough world of the docks. But after a chance encounter with two men while out scavenging for food, his fortunes are changed forever.

Kit is taken aboard the Swallow, a large merchant ship partly owned by the two men, and after spotting some promising qualities in him they decide to train the boy for a life at sea.

And so begin the adventures of Kit, which see him rise through the ranks and risk all on the high seas. Meanwhile, England edges ever closer to civil war, and very soon Kit must choose which side he will fight for…

A scintillating adventure at sea, based in detailed historical research, perfect for fans of Patrick O’Brian, C. S. Forrester and Julian Stockwin.

‘Woodman is a master of both maritime nonfiction and fiction’ Booklist