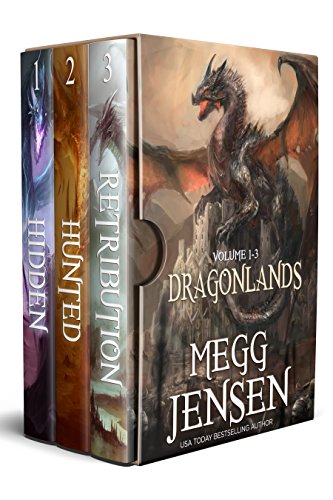 Enter the world of Dragonlands with the first three novels from this bestselling epic fantasy series. Includes: Hidden, Hunted & Retribution

Enter the world of Dragonlands with the first three novels from this bestselling epic fantasy series.

Hidden:
The mystery enshrouding Hutton’s Bridge is as impenetrable as the fog that descended at its borders eighty years ago. Each year, three villagers enter the mist searching for answers. No one ever returns.

Then a dragon falls from the sky to the town square, dead—the first glimpse of an outside world that has become nothing more than a fairy tale to Hutton’s Bridge. Except to Tressa.

Tressa grew up with Granna’s stories of the days before the fog fell. When Granna dies, leaving Tressa without any family, Tressa ventures into the fog herself, vowing to unravel the foul magic holding Hutton’s Bridge captive.

What she discovers beyond the fog endangers the lives of everyone she loves.

Hunted:
The fog that trapped the people of Hutton’s Bridge for eighty years has disappeared, but now so have the villagers.

Fearing the worst, Tressa and Bastian must navigate a new and dangerous world in search of their people. Among their allies are a healer, a warrior, and even a dragon–but their enemies are far greater.

Hutton’s Bridge has long protected a powerful secret, one the dragonlords will kill to control. As the realms rise, Tressa and Bastian risk everything to save their people, until one must make the ultimate sacrifice.

Retribution:
Tensions are mounting in the Dragonlands. The dragon hordes are mustering, each with its own agenda. But Tressa must conquer her personal demons before answering the call to war.

Gravely ill, her body undergoing mysterious and frightening changes, she travels to a distant land for the answers crucial to her survival. What she discovers rocks her to the core.

As the battle begins, a long-slumbering magic–dark, powerful, and brutal–awakens. And Tressa learns the ones you love most can become your greatest enemies of all.