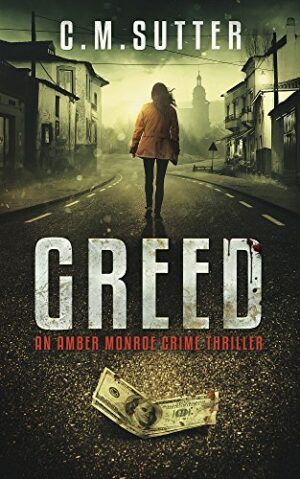 Deputy Amber Monroe hopes to be promoted to detective soon. When two men are discovered on the edge of town, shot execution style, the team, led by Lieutenant Jack Steele, hits the highway in search of a killer, but it’s Amber’s attraction to a new man in town that puts her front and center on the killer’s short list and turns the case upside down.

Washburn County Deputy Amber Monroe is following in the footsteps of her sister, Jade. She devours everything she can during her detective training in hopes of being promoted soon.
Living in small-town USA has its advantages, like a sense of security, and disadvantages, like being close to Milwaukee and its crime. Washburn County has become the dumping ground of murder victims, courtesy of its neighboring county to the south.
When two men are discovered on the outskirts of North Bend, each with a bullet to the head, Amber’s team, led by Lieutenant Jack Steele, hits the highway in search of a killer.
Assisted by the Milwaukee PD, they go deep into Brew City’s underbelly, which reveals far more than anyone ever expected. Crimes involving murder and counterfeiting keep the team running in every direction, but it’s Amber’s attraction to a new man in North Bend that puts her front and center on the killer’s short list.
She doesn’t get far before the entire case turns upside down.

* All books are standalone stories but since characters carry over, they are best read in chronological order.

Start at the beginning of the Monroe Sisters’ world with Maniacal. Find all of the books leading up to the Kate Pierce Crime Thriller Series listed in order below.

Note: The Jade Monroe FBI Thriller books follow on the heels of the conclusion of Exposed, Book 5, in the Detective Jade Monroe Crime Thriller Series.

Note: The Amber Monroe Crime Thriller books follow on the heels of the conclusion of Malice, Book 5, in the Agent Jade Monroe FBI Thriller Series.

Editorial Review:
“Fans of C. M. Sutter’s Jade Monroe crime thrillers will be pleased to learn that Jade’s younger sister, Amber Monroe, is about to make detective and kicking off her own law enforcement career in small-town North Bend, Wisconsin. Amber is determined to succeed in law enforcement and eager to prove her investigative chops—along with another deputy who happens to have psychic abilities—and she gets the chance when two dead bodies are dumped in North Bend. There’s also the intrigue of a possible counterfeiting ring turning up in town, making this fast-paced tale a terrific kickoff to the new series.” Angela M., Editor, Red Adept Editing