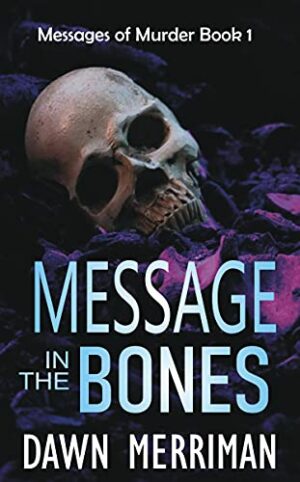 I am NOT a freak, although many people call me that. The night my father was murdered and I was left for dead, I awoke with the ability to “sense” things. Touching things can give me visions, sometimes horrifying, murderous ones. That doesn’t make me a freak, but it gets me into trouble

I lived through her murder when I touched her bones

I am NOT a freak, although many people call me that. The night my father was murdered and I was left for dead, I awoke with the ability to “sense” things. Touching things can give me visions, sometimes horrifying, murderous ones. That doesn’t make me a freak, but it gets me into trouble.

The bones of a murdered woman are unearthed and our safe small town is shaken to its core. Her killer was good at hiding the truth and after decades in the ground, any clues are gone – her murder a complete mystery. The only clues are the ones I can see.

My brother was recently promoted to head detective. With no other clues, you think he’d be thrilled to have my help, but he’d rather pretend I don’t exist than use my gifts. Thank heavens, his handsome partner doesn’t agree and calls me in.

Although I’m terrified to touch her, the mysterious skeleton has a story that needs told. When I grip the bones, I live through her murder. The message I see changes me – changes everything.

Instead of a helpful hero, I become even more of an outcast in my small town. The only person who believes me is the one man who knows the truth of my visions – the killer. He’s desperate to keep his secrets buried. Now he hunts a new prey – me. I don’t need psychic powers to know he’s right behind me – closing in – about to strike.

Psychic mystery readers like you say, “This book has everything I love in a novel – action, a twisty mystery and a touch of romance. It grabbed me from the first word and I couldn’t stop reading until I finished the entire series.”

…Detective Lucas leads me to the dirt pile where the bones wait for me. My tattoo burns under my zip up running sweater. I fight the urge to rub the burning. Rubbing won’t stop it anyway. I move slowly closer to the bones gleaming white in the dirt. My whole body tingles now, not just my tattoo.

“Can I get some privacy? Have these other people move back.” The small crowd at the scene eyes me with interest, but try not to show it.

Head Detective Dustin may not have shared his plans with them, but everyone knows who I am and what I do. They’re excited for a show.

The buzz from the bones fills me, much stronger than anything I’ve felt before. The urge to run nearly wins, but Lucas takes hold of my arm. He leads me to the bones, my feet dragging slowly.

The three of us crouch by the dirt pile. Lucas next to me, Dustin nearby. I say a short prayer to center myself. “Lord, let me see what I need to see.”

I pull off my left glove and kneel in the dirt. Clods and stones poke my knees.I ignore the skull smiling at me and reach for the hand bones.

I sense her before I touch her.

A blast of information, stronger than I expected, makes me jerk my hand back. “It’s a woman. Her name is Karen.” The crowd behind me twitters and whispers.

“Step back.” Dustin barks at them.

I put my hand in my lap, fear slamming through me. Whatever I’m about to see won’t be pretty. I can still tell them no, get back in my car and go to work.

Lucas leans close and whispers, “It’s okay. You can do this.”

I don’t share his confidence, but I trust God and my tattoo. I squeeze my eyes shut and ask God for strength to do what he needs me to.

I close my bare hand on her boney one.

—
Find out what happens next in this Christian suspense thriller. Get your copy, then clear your afternoon, because you won’t be able to put this book down.

Save Every Day
Read more, spend less with our daily email!

Save Every Day
Read more, spend less with our daily email!
You are Subscribed!
You will receive a daily email recapping the best Kindle book deals of the day!

Don't miss out on the latest Industry news
You are Subscribed!