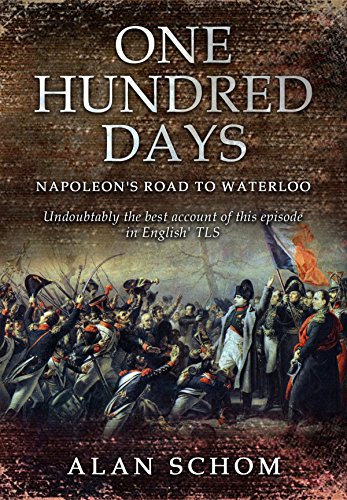 A full-scale reconstruction of the eventful one hundred days following Napoleon's escape from exile on Elba examines his march across France, the rebuilding of his army, and his epic confrontation with Wellington at Waterloo.

Napoleon was the hero of his age, a man who helped France become, briefly, a hugely impressive European power. In 1814, he was imprisoned on Elba, planning an escape and plotting his course of action once he had done so. From the time he landed back in France to his loss at Waterloo, one hundred days elapsed.

Scholar Alan Schom, an expert in the history of the Napoleonic era, outlines the key personalities and events of those hundred days in 1815. Napoleon is a far cry from the heroic leader of the time before he was imprisoned in Elba, attempting to gather forces and convince his old friends to help him once again.

Despite the difficulties he faced from his irresponsible brothers, and acting in opposition to the statesman Talleyrand, Napoleon was only a whisker away from a famous triumph, and only eventually defeated by the mobilised force of the Allies.

It was the Duke of Wellington and Blücher who defeated Napoleon, who was prepared to take on England, Austria, Prussia and Russia.

The book includes a brilliant account of the manoeuvres at Waterloo, and is a fantastic tale of daring that is a useful book exactly 200 years on from the 100 days.

‘Undoubtedly the best account of this episode in English’ — Richard Holmes, The Times Literary Supplement

‘A brisk, pacey account of the Hundred Days, written in a fluent and engaging manner…There are excellent sketches of Fouché, Talleyrand and Carnot and a most able analysis of the background…as well as fascinating material on espionage and intelligence’ — Frank McLynn in the Literary Review

‘A riveting narrative of events…a sparkling portrait gallery of the personalities who shaped those events’ — Russell F. Weigely, author of The Age of Battles

Alan Schom was a professor of French and European history before retiring to write full-time. He is the author of Emile Zola: A Biography and Trafalgar.