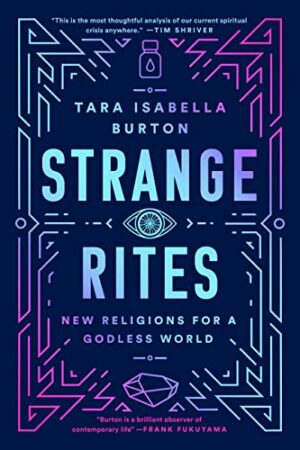 A sparklingly strange odyssey through the kaleidoscope of America’s new spirituality: the cults, practices, high priests and prophets of our supposedly post-religion age.

A sparklingly strange odyssey through the kaleidoscope of America’s new spirituality: the cults, practices, high priests and prophets of our supposedly post-religion age.
Fifty-five years have passed since the cover of Time magazine proclaimed the death of God and while participation in mainstream religion has indeed plummeted, Americans have never been more spiritually busy.
While rejecting traditional worship in unprecedented numbers, today’s Americans are embracing a kaleidoscopic panoply of spiritual traditions, rituals, and subcultures — from astrology and witchcraft to SoulCycle and the alt-right.As the Internet makes it ever-easier to find new “tribes,” and consumer capitalism forever threatens to turn spirituality into a lifestyle brand, remarkably modern American religious culture is undergoing a revival comparable with the Great Awakenings of centuries past. Faith is experiencing not a decline but a Renaissance. Disillusioned with organized religion and political establishments alike, more and more Americans are seeking out spiritual paths driven by intuition, not institutions.
In Strange Rites, religious scholar and commentator Tara Isabella Burton visits with the techno-utopians of Silicon Valley; Satanists and polyamorous communities, witches from Bushwick, wellness junkies and social justice activists and devotees of Jordan Peterson, proving Americans are not abandoning religion but remixing it. In search of the deep and the real, they are finding meaning, purpose, ritual, and communities in ever-newer, ever-stranger ways.