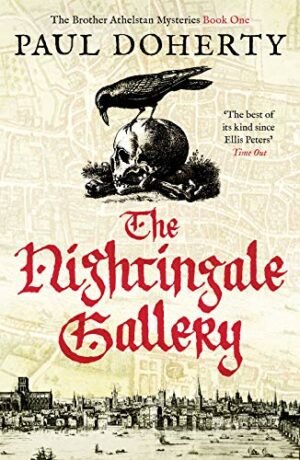 .It is 1376, and the famed Black Prince has died of a terrible rotting sickness, closely followed by his father, King Edward III. The crown of England is now left in the hands of a mere boy—the future Richard II—and the great nobles have gathered like hungry wolves around the empty throne. A terrible power struggle threatens the country, and one of London’s powerful merchant princes is foully murdered within a few days of Edward’s death. Coroner Sir John Cranston and Dominican monk Brother Athelstan are ordered to investigate, and the body count begins to rise, Cranston and Athelstan are drawn ever deeper into a dark web of intrigue.

A terrible power struggle threatens the very core of Britain…

In 1376, the Black Prince dies of a terrible sickness, closely followed by his father, King Edward III in 1377. The crown of England is left in the hands of a mere boy, and the great nobles gather like hungry wolves round the empty throne.

Soon the prelates of the church and the powerful Merchant Princes of London are drawn in. One of these, Sir Thomas Springall, is foully murdered within a few days of the old king’s death.

Sir John Cranston, the coroner of London, is ordered to investigate. He is assisted by Brother Athelstan, a penitent Dominican monk. From the sinister slums of Whitefriars to the barbaric splendour of the English Court, Cranston and Athelstan are drawn into a dark and terrifying web of intrigue…

Praise for The Nightingale Gallery

‘If you like Inspector Morse, you’ll love Brother Athelstan’ Prima