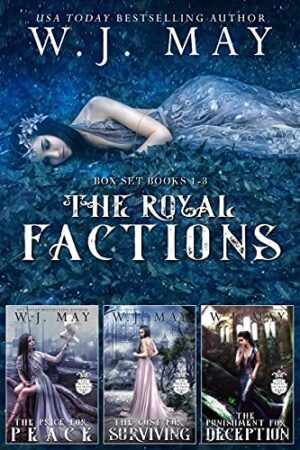 Just once Hayley Bennett would like to spend the holidays at her parents’ house without feeling as if she’s stepped onto the set of The Bachelorette. Her mom’s been planning her wedding since the day she was born, but thirty years later, Hayley hasn’t come up with a groom. Or has she?

Book 1 – The Price for Peace

How do you keep fighting when you’ve already been claimed?

When sixteen-year-old Elise is ripped from her home and taken to the royal palace as a permanent ‘guest’, she thinks her life is over.

Little does she know it has only just begun…

After befriending a group of other captives, including the headstrong Will, Elise finds herself swept away to a world she never knew existed—polished, sculpted, and refined until she can hardly recognize her own reflection. She should be happy to have escaped the poverty of her former life. But she knows a dark truth.

The palace is a dream on the surface, but a nightmare underneath.

With a dwindling population, the royals have imprisoned the teenagers to marry and breed. Only seven days remain of freedom before they will be selected by a courtier and forever claimed.

Danger lurks around every corner. The only chance of escape is death.

But when the day of the claiming finally arrives…the world will never be the same.

Book 2 – The Cost for Surviving

The wait is over, the dust has settled, and the captives have finally been claimed. Elise thought the deadly game was finished, but the more time she spends in the palace, the more she begins to fear the real game has only just begun.

In the aftermath of the ceremony, each of the friends try to adjust to their new life. But some are having more trouble than others. Will’s perpetual defiance lands him in trouble with the queen herself, while Elise is playing a dangerous balancing act, trying to understand the affections of the prince. The man can be sweet, but also psychotic. At times, he seems to truly care—but with a snap of his fingers, she’d be sentenced to death.

Danger is brewing. In the royal court, nothing is as it seems. They are told repeatedly to content themselves with the life for which they’ve been chosen. But how can you live with monsters without becoming a monster yourself? Is it really a life, or just going through the motions?

The more time they spend in the palace, the longer the days drag on, the more a single word keeps rising in each of their minds…escape.

Book 3 – The Punishment for Deception

How can you move on with the future without surrendering the past?

When an escape attempt goes desperately awry, Elise and Will find themselves at the mercy of the very people who have imprisoned them all this time. Tensions sharpen, punishments are severe, and they soon discover what terrible things are required if they wish to survive.

But such wild spirits were never meant to be tamed.

While appearing to submit, the future princess still dreams of freedom. And as the day of her wedding approaches, those dreams begin to turn into something more.

With so many eyes upon her, can she maintain the illusion? Is the crown prince really such a monster, or is there more to him than meets the eye?

Time is running out. All that’s left are choices.

But will she have the strength to decide?