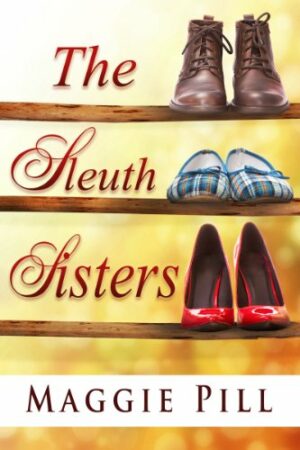 In this cozy mystery, the first of a series, middle-aged sisters Faye and Barb decide to open a detective agency in Allport, their small town in northern Lower Michigan. They agree that Retta, their baby sister, will NOT be included, since she tends to take over any organization she’s part of. Sweetly but firmly, Retta will tell you what you should do, could do, and will do.
The agency does not take off, and Faye reconsiders the decision to leave Retta out, since as the widow of a slain state trooper, she’s got contacts all over Michigan. Retta’s only too willing to “help” and immediately begins second-guessing their decisions, which leads to sparks between her and Barb.
The sisters finally get a decent case: finding a man who apparently murdered his wife years ago and has been on the run ever since. As they try to investigate what happened, they’re opposed at every turn. Local cops doubt the “lady detectives” and most of the town is convinced Neil Brown killed his wife and brother-in-law in a fit of anger. The murder victims’ father has no doubt Brown is guilty, and he’s furious that anyone might take a different view.
Still, someone wants to keep the sisters from finding Brown and digging into what really happened the day he left Allport. As the sisters piece things together, the new police chief seems like a possible ally. The problem is that both Barb and Retta are attracted to him, and Retta seldom meets a man she can’t get. Accepting defeat in that arena, Barb tries to concentrate on the case and prove Brown isn’t guilty of murder. That leads to a show-down with a desperate killer in a remote, dangerous spot. Only Faye and Retta can save her, and they have no idea where she is.
Family humor–particularly the close-but-oh-so-different status of sisters, plays a big role in this murder mystery. Each sister has strengths and foibles. Barb, intelligent and composed, sneaks around town at night, correcting the spelling and grammatical errors on signs that drive her bonkers. Faye, kind-hearted but insecure, can’t see herself as the capable person she is. And Retta? She’s only trying to help when she tells you exactly what you should do with your life–or your detective agency.
One reviewer’s comment: “If you have sisters, you have to read this book!”