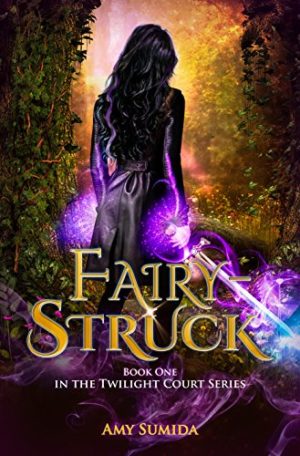 Not exactly romantic but attraction arced between us like lightning. A rare and beautiful connection. Too bad he’s a fairy—a hunter, no less. Nothing can happen between us, it’s forbidden. Besides, I have bigger issues to deal with. Like a bioweapon that can destroy the entire human race. We have to work together, but I’m a professional. I can ignore the way he stares at me as if I’m already his and the way my heart races when I look at him. No problem. And if that doesn’t work, I can always kill him.

I met him at the end of my sword.

Not the most romantic of introductions but it suited us. We’re both warriors; he’s a lord of the Wild Hunt of Fairy, and I’m an extinguisher—a psychic soldier trained from birth to protect our world from his kind. Attraction arced between us like lightning. I saw it in his eyes, watched them shift from frigid silver to molten metal. Despite all of that, I knew it could go nowhere. Fairies killed my mother and her death nearly destroyed my father. Then there’s the fact that extinguishers don’t date outside our society. A human would be bad enough, but a fairy? That’s not just frowned upon, it’s forbidden. We cannot be together. It’s impossible. And that’s fine. I’ve got bigger things to worry about. Like my new charge: a dryad who just informed us of a fairy plot to exterminate the human race. I’ll focus on her and ignore the wild thrumming of my blood every time I look at him. I’m a professional; I can handle one arrogant, annoying, stubborn, dangerously sexy fairy hunter who won’t stop staring at me as if I’m already his. I’m not one of his delicate, Fey ladies, longing to swoon into his arms. I carry an iron sword and iron is poison to Fairies. If he gets too close, he’ll be the one swooning.

Praise for Fairy-Struck.
"Read this instead of Merry Gentry."
"This fairy princess has quite the sense of humor."
"Every book this woman writes… I’m right there!"
"Her (Amy Sumida’s) snarky, fun, quote-worthy books are always something I jump to read, even at the detriment of losing sleep."

Powerful, sensuous, and shockingly hilarious, grab your copy of this bestselling book and begin the epic, 9 volume series TODAY!
This series has been #1 in the top 100 free books on Amazon and has made the top position in several categories including: Fantasy & Futuristic Romance, Dragons & Mythical Creatures Fantasy, Paranormal Witches & Wizards Fantasy, and Fairy Tale Fantasy
Extinguish in order:
1. Fairy-Struck
2. Pixie-Led
3. Raven-Mocking
4. Here There be Dragons
5. Witchbane
6. Elf-Shot
7. Fairy Rings and Dragon Kings
8. Black-Market Magic
9. Etched in Stone

The Spellsinger Series
1. The Last Lullaby
2. A Symphony of Sirens
3. A Harmony of Hearts
4. Primeval Prelude
5. Ballad of Blood
6. A Deadly Duet
7. Macabre Melody
8. Aria of the Gods
9. Anthem of Ashes
10. A Chorus of Cats
11. Doppelganger Dirge